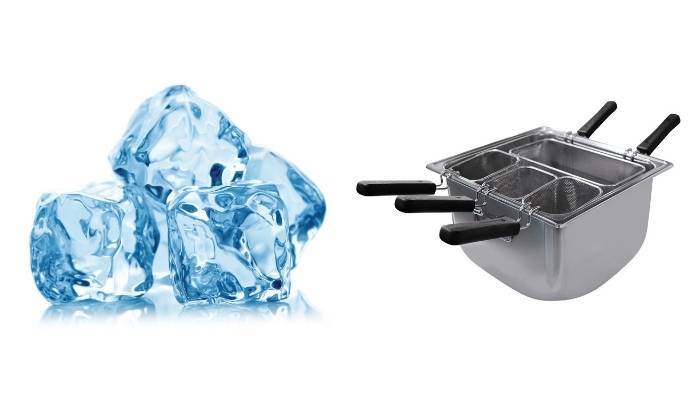 If you ever wonder what happens if you put ice in a deep fryer, in short, a violent reaction takes place. Probably, this question comes in your mind from your cooking curiosity or any scientific thought.

But let us warn you before you do anything like that. Whatever your plan is, we will reveal the secret of this incident in an easy way for your understanding.

Why Oil And Ice Do Not Mix In A Deep Fryer

Firstly, you need to realize why oil in a deep fryer does not go with ice. Water is the liquid form of ice which fails to incorporate with oil. So throwing ice on the deep fryer would even make the situation worse.

State transition is a common incident between different elements in the world of science. The scenario remains steady if it happens in a gradual manner. But if the transition of states is rapid and sudden, an explosion occurs eventually.

Moreover, the exceptionally high temperature of oil produces enormous amount of heat. And, that creates a significant change in the pressure and thus influences the volume to increase. Also, there is a massive temperature gap between oil’s hot liquid state and ice’s frozen state in the deep fryer.

For this reason, putting ice in a deep fryer full of oil is not a good idea at all.

What Happens When You Put Ice In A Deep Fryer

Now the scenario will depend on what type of ice you would put in a deep fryer. There are mainly two types of ice. And, we are explaining both sides for your ease of understanding:

It is a familiar ice type that almost all of us use in our daily life. At 0°C, you can get it from the freezer by freezing water.

Now what happens when you leave normal ice inside a deep fryer? At first, we suggest you stand back if you don’t want to hamper your face. The reason is the mixture in the fryer may produce some hot bubbles, and creates a dangerous situation by spreading here and there.

When ice comes in contact with oil, it starts to melt. And, ice turns into cold water. What if there are several ice cubes?

The process would repeat in that case. But with the addition of a large number of ice cubes, not all ice would evaporate for the heat transfer property.

If the fryer has no connection with an external heat source, the outcome would be something else. In that case, oil would cool down and there would be two different layers of oil and water at the same time. It might happen because of the varying density of the elements.

However, if you plan to do such an experiment in your kitchen, there is a major risk of fire expansion. So it is better to maintain proper safety precautions so that any accident doesn’t happen.

This type of ice is basically Carbon dioxide which has a solid structure. At a very low temperature, you can store it in a small place for its preparation.

Many factories use dry ice as a cooling agent. That means it is effective in making anything cool. Apparently, it possesses lower temperature than the normal ice.

Regarding the fact of putting dry ice is not that much different. Similar to normal ice, dry ice also discharges a big number of heated droplets from the fryer.

Dry ice has a boiling point of -78°C which is less than oil’s boiling point. After putting a number of dry ice cubes in the fryer, they show more dynamic reaction than the normal ice cubes.

As a result, when dry ice hits the oil, it tries to expand and turn into steam. But lack of space in the enclosed area prevents ice from expanding. So the mixture of dry ice and oil causes a fiery explosion. At the end, oil will begin getting chaotic and pop outside of the deep fryer in a more severe way than the case of normal ice.

Which One To Pick?

Now you know very well the consequences of putting both types of ice in a deep fryer. At this moment, you may be in a dilemma which one you should choose to do the experiment. From our knowledge of Thermodynamics, we suggest you prefer normal ice over dry ice.

There are a couple of reasons behind picking the earlier one, for example:

So what happens if you put ice in a deep fryer? The answer is simple. The oil in the fryer reacts violently after coming in contact with ice. That influences the oil droplets popping out of the fryer which can be fatal unless you keep a safe distance. If the amount of ice cubes is minimum, the dispersed oil droplets will be in small quantities.

Still, they are hot enough to burn your skin. Prevention is better than cure. So we recommend you avoid such experiments. Even if you do for scientific research purposes, make sure you have sufficient safety precautions available.