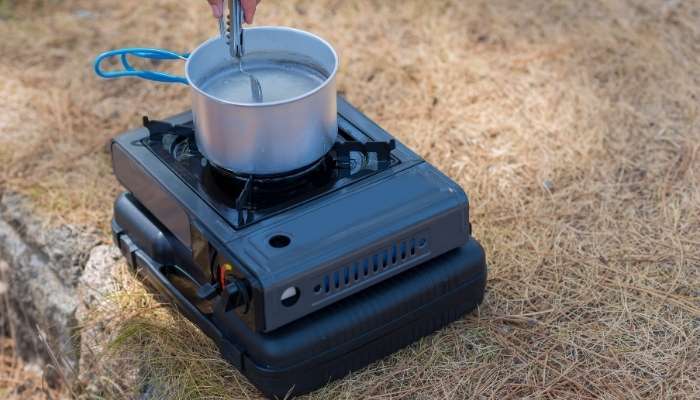 Water is an essential ingredient in cooking any food. And, it becomes far more important while pouring in a pressure cooker. This kitchen tool mainly requires a form of liquid to create sufficient steam to build pressure. So the amount of water plays a pivotal role in maintaining the momentum of the process.

You might have read many articles on pressure cooking but still not sure about the overall process. Here are some crucial tips for you to know how much water in pressure cooker is necessary:

How Much Water Is Needed For Pressure Cooking?

The amount of water in an electric pressure cooker varies on the type of food you want to cook. If you are a beginner pressure cooker user, we suggest you use a minimum of one cup of liquid to pour in the cooker.

However, you can change the amount of water if the recipe specifies anything else. But it is better to fill your cooker beyond the halfway mark to keep space for the creation of steam. If you don’t do so, your cooker might not provide internal pressure properly for lack of water.

There are some foods that expand easily like rice, dry beans, dried vegetables. While cooking such foods in a pressure cooker, maintain necessary caution. Due to increased pressure in the cooker, such foods might demand a wider area to react after putting in the appliance.

The amount of water will also depend on the pressure cooker size itself. For example, you always need to add less water in a 2-quart pressure cooker than a 10-quart one.

The age of your pressure cooker is another considerable fact to determine the amount of water you need to add to it. There are various types of pressure cookers available.

The second-generation ones require a minimum of half a cup of water to cook foods. On the other hand, for weighted cookers, the minimum water amount is one cup for a cooking duration of 20 minutes.

Why Does A Pressure Cooker Need Water?

A pressure cooker mainly depends on steam to work properly. Firstly, it encloses the steam in a contained place. Then, it enhances the boiling point of the liquid in it. Since the steam stays under the cooker lid, it gathers above the food.

As a result, the water molecules which turn into steam influence the environment of the appliance by increasing the pressure. The main purpose is to follow such an efficient way to prepare the food conveniently.

The question may arise in your mind: how do water and pressure relate to cooking food? Let us describe the logic behind it. When you add water to your cooker and then add heat to it, chemical reactions take place there.

Once you increase the temperature, the water pressure also rises inside the enclosed place which helps to cook food.

What Happens If I Overfill My Pressure Cooker

You might be wondering what can happen if you add more than enough excess water to your cooker. But overfilling the pressure cooker with water is not a good idea at all. The reason is excessive water in the cooker might generate too much pressure which may break the food down. As a result, the food can lose both flavor and texture.

The scenario is almost similar to the case of boiling meat for so long with a large amount of water. If you add too much water to boil meat, the flavor shifts to the liquid. Hence, the boiled meat doesn’t taste delicious anymore.

Moreover, adding too much water can be a dangerous approach to cook foods. In fact, you might experience the lid of the pressure cooker flying off, similar to how a cork gets detached from a champagne bottle.

Can A Pressure Cooker Really Save My Time?

Yes, a pressure cooker is capable of cooking your food at a 70% faster rate than the actual cooking time of a conventional cooker. However, we don’t assure you that all of them can do the same.

The most impressive fact of pressure cooking is you can easily fix an underdone food in it. You just have to return the pan to the stove, reseal the lid and run high pressure again for several minutes.

Can I Open The Lid While Cooking My Food?

Obviously not! Never think of removing the lid from your pressure cooker when you cook.

At first, make sure to release the pressure from the cooker before you remove the lid. There are different ways of releasing pressure while cooking in such a type of cooker.

One of them is “Natural process” where you can just turn off the heat and the pressure will fall naturally. It takes around 20 minutes and works perfectly for foods like dried beans or braised meats.

Another way is “Quick release” where you need to manually open the release valve on your cooker. This one is ideal for cooking vegetables and grains mostly.

Can I Cook In A Pressure Cooker Without Water?

Yes, you can! There is an alternative way to cook any food in a pressure cooker without water. That method is known as Infusion Cooking. The technique mainly covers food in a flavor enhancing liquid like broth or stock.

Any type of liquid or combination of liquids is workable for infusion cooking. But even in this method, one of the most important things is to add a sufficient amount of liquid to the cooker to get well-cooked food.

Pressure cooker is one of the best cooking methods to cook your desired food within a short time. It is such an essential kitchen appliance that all of us use almost everyday in our life.

So it is necessary for you to learn how it works in different circumstances to cook different types of food. We hope now you are aware of how to deal with the amount of water in a cooker.