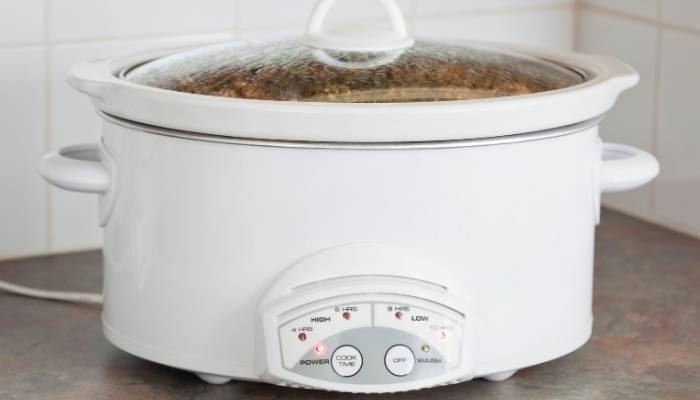 No American kitchen is ever complete without a slow cooker, this amazing appliance has turned into a staple item in every kitchen. Although some people might feel hesitant wondering how much energy it consumes. Because, a slow cooker runs for a pretty long time, 4-8 hours depending on the recipe.

If you are also trying to calculate how many electric units your slow cooker consumes per usage, you’ve come to the right place. Because, in this post, we are going to provide detailed information about slow cooker wattage, so that you can use it to calculate energy consumption.

Without further ado, let’s get started—

How Much Electricity Does My Slow Cooker Use?

The energy consumption of a slow cooker has always been a baffling subject to many people. Because almost nobody knows how much energy their slow cookers are using. Does it spend less energy on lower settings? Or does it spend the same amount of energy for both cooking modes?

So how do I know how much energy my cooker consumes? Well, whatever the answer is, the good news is no slow cooker will add up too much to your energy bill. It will cost you only 10-25 cents for cooking a meal in the slow cooker. So it’s way lower than any usual heating appliance like a pressure cooker or rice cooker.

When the cooker is in low mode, it may consume as little energy as 50 watts per hour. Depending on the model, it may consume even 100 watts. So on an 8 hour session, it will consume as much as 0.8 kWh energy, which will cost you only 10-12 cents.

On the other hand, it may use around 300 watts per hour when it’s on its highest setting. So, for an 8 hour session, the slow cooker may use 2.4 kWh, costing around 25 cents. Although it is quite rare for the highest mode. We generally cook our meals for 4 hours if we use the highest mode.

So let’s check out the factors affecting the energy consumption—

The energy consumption of your slow cooker will largely depend on the size. Larger slow cookers will definitely consume much more energy than smaller ones. So if you have a large slow cooker, you may have to deal with higher electric bills.

The size of your slow cooker is also important for another reason. That is, the surface area of the heating plate will be larger than a smaller one. So it spends more energy no matter how much food you put in the cooker.

So if you want to cut down your bills, don’t go for larger slow cookers. Get a regular sized slow cooker if you don’t have a large family. That way, you can really save some money on your electric bill.

The cooking options are also an important factor. We don’t cook all the food at the same temperature. Sometimes we use a lower temperature for meat dishes. Because meats need to be cooked slowly for the best flavor.

On the other hand, higher temperatures are kind of appropriate for cooking vegetables. So that we can finish off the cooking faster. Plus, a higher temperature is essential to cook certain foods like soups or stews.

As we already mentioned, higher temperature means the consumption of more energy. On the contrary, lower temp consumes way less energy. So if you always cook your food on high heat, it will cost you more on the bills.

Although the energy consumption on the highest temp is still pretty low considering other kitchen appliances. So don’t hesitate to cook your food on high when you need to.

Your cooking time is the final thing that determines the energy consumption. The calculation is pretty straightforward, longer cooking time means more consumption. But there is a way to reduce it even though you cook it for a long time.

Many of us prefer getting a multi cooker to save our counter space and money. A multi cooker is really an amazing appliance without compromising its individual operation. From pressure cookers to slow cookers, it covers up everything that you might get from a cooker appliance.

Now the question is, does a slow cooker also spend this much watts? The answer is maybe, depends on the brand and model. The low mode of some multi cooker is as hot as the medium mode of a usual crockpot. So the bills may turn up a little higher than any usual slow cooker.

Still, slow cooking is incredibly cost efficient than any type of cooking. So you can really consider switching to slow cooker recipes if you want to cut the budget short in the kitchen. And the best slow cooker will help you do that.

So there goes our in depth guideline about slow cooker wattage. We hope this article has provided you with enough information about this amazing appliance.

If you’re still hesitating to get one for yourself, go ahead and buy one! You won’t be sorry making a slow cooker curry. Happy cooking!