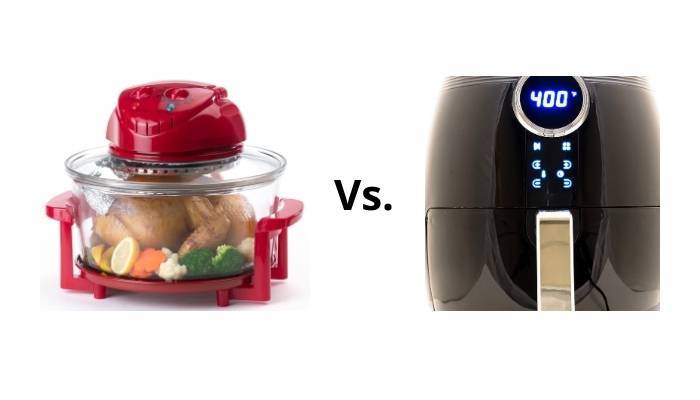 An air fryer is undoubtedly one of the most talked-about kitchen appliances in recent years. Nobody could resist the promise of enjoying some guilt free deep fried food, and this appliance has made it possible.

Is A Convection Oven The Same As An Air Fryer

Almost everyone has heard of a convection oven. This kitchen appliance is almost as similar as a conventional oven, but with a few differences. A convection oven is equipped with single or multiple fans that circulate air around the food.

The air circulation ensures an even heat distribution over the food. So it heats the food from all sides resulting in an even cook. If you know the mechanism of an air fryer, you can probably relate this with the mechanism.

An air fryer also cooks the food by circulating hot air over the food, cooking it evenly on all sides. So these two mechanisms kind of mirror each other. So you can use your convection oven for all your air fryer recipes.

It has not only saved up some counter space in the kitchen but also made the recipes a lot easier.

How To Use An Convection Oven As An Air Fryer

If you are already experienced with using an air fryer, you might have noticed that the air fryers have many preset options to facilitate the cooking process.

You may not avail of such options in your convection oven, which can make the cooking process complicated.

Most of the convection ovens offer temperature, time & fan options for cooking the food, so choosing the right temperature and time may be the trickiest part.

If you have previously cooked such foods in a conventional oven, it will be easier for you to set those.

If you don’t know the right temperature, just find the optimum cooking temperature & time for your desired preparation in the recipe.

For example, cooking a piece of chicken breast should take only 25-30 minutes at 325 to 375F. Just like that, find the temperature for your preparation.

So put on your kitchen apron and make some French fries in your convection oven! Happy cooking!