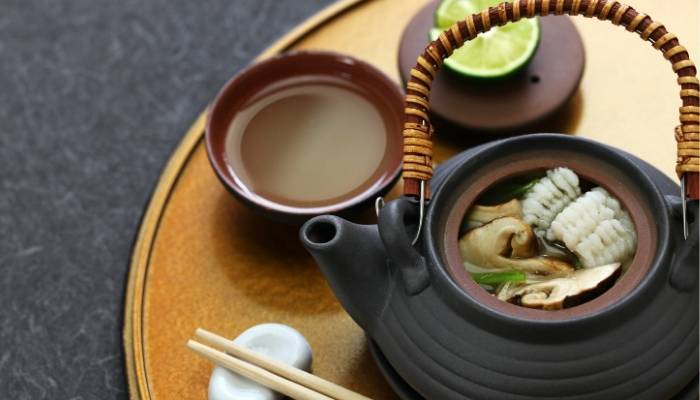 How many times did you have your dinner in a grouchy mood because of mushy rice? Well, if you don’t know how to fix mushy rice in rice cooker, you have to be sorry even in the future. From now, you won’t have to worry about it because after reading this post, you will figure out how to fix it.

Those who don’t like mushy rice, know the pain of devouring it. A perfectly cooked, fluffy rice is everything you need for your meal.

Despite a rice cooker ensures the right doneness & texture, your rice may also turn mushy if you pour in too much water in the rice cooker pot.

If you follow our techniques, this should not be a problem at all. Without further ado, let’s dig into the tutorial—

How To Fix Mushy Rice In Rice Cooker: Our Way

There are several methods of fixing mushy rice. The best method will depend on the current situation of your rice. When you realize your rice has been overcooked, immediately stop cooking the rice and turn off the rice cooker. Check if the rice has any liquid left in the pot.

Now there can be two scenarios, the first one is there will be some remaining liquid in the pot. And another one is the rice has absorbed all the additional liquid.

In the first case, immediately discard the remaining liquid as much as possible. Use a colander to strain the liquid and keep it there for at least 10-12 minutes. Be careful while stirring the rice, you have to be as gentle as possible. If you stir it too much, you will end up mashing it even more.

On the other hand, if you see the rice has already soaked up most of the liquid and it has become soggy and mushy, take a wide serving dish and spread the rice over the surface.

Again make sure to be really gentle with the rice since it is already pretty delicate. Try to spread it as much as possible, so that it forms a thin layer.

Now the tricky part is over, use a fan to dry out the moisture from the rice. You can also leave it as it is, but with a fan, it’s kinda easier.

This will cool down the rice as well as dry out the moisture, so the rice becomes fluffy. With this technique, you can’t enjoy the warm rice.

But at least you will get to enjoy the fluffy rice, won’t you? 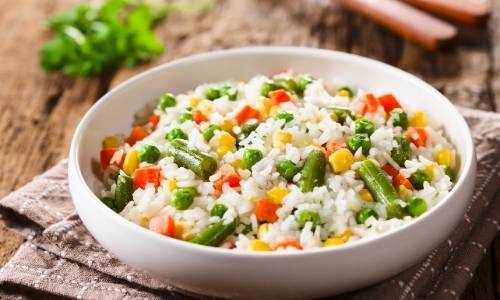 How To Reuse Mushy Rice

Sometimes you don’t even get the chance to fix the rice if it’s already too mushy. Anyone would take a hard pass on the mushy, gooey rice. But you can make other dishes with it.

Feeling curious already? Let’s see how we reuse the mushy rice instead of throwing it away— The rice pudding is such a dish that every country has its own version. The use of different spice mix gives this dish a distinct taste in every country, but the basic ingredients are the same.

The three basic components of this dish are rice, milk & sugar. This dish is like an empty canvas, you can add any ingredient to make it palatable to your taste bud.

Making rice pudding from mushy rice is extremely easy. In fact, the job is half done since your rice is already cooked. Just pour in some milk and continue simmering the mixture until it becomes a little thick.

Then add sugar and spice according to your taste and simmer a good 10 minutes to let the sugar dissolve and spice flavor to incorporate with the pudding. After that, you are pretty much done!

You should always serve the rice pudding chilled, with both fresh & dry fruits. Rice pudding tastes super delicious & it’s also nutritious for all types of people.

Rice pudding is wonderful as a breakfast on a summer morning for its refreshing taste. So as you can see, it’s not always bad to find your rice to be mushy, a rice pudding will be knocking at your door! 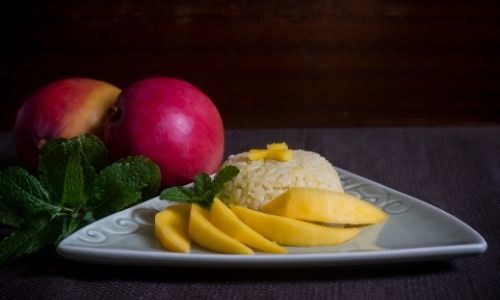 Yeah! You heard it right! It’s actually possible to make this Thai delicacy in your house, that too with the mushy rice that you’re considering to throw out.

The mellow & refreshing taste will definitely make you go crazy over this dish. So let’s not waste any more time and learn how to make it—

Since your rice is already mushy, it won’t be wise to further cook it with coconut milk. Rather make a coconut sauce by boiling some coconut milk (2 cups of coconut milk for each cup of uncooked rice) with some sugar and a little pinch of salt and reduce it.

The sauce should be as thick as heavy cream. Once the sauce reaches the right consistency, pour some of it on the cooked rice and simmer the rice mixture on low heat.

Be careful not to let it burn or stick to the bottom of the pan. Once the rice has soaked up all the coconut sauce, take it off the heat and cool down.

When both the coconut sauce and the rice will cool down, serve it on a plate with some sliced up mangoes on the side.

So there you go, delicious & refreshing Thai sticky rice with mango is ready! Serve this dish to your family, they won’t even realize it is made from some mushy rice. Don’t forget to try out this dish the next time you accidentally overcook your rice!

That is everything you need to know about how to fix mushy rice in rice cooker. After reading this post, I hope you will never have to suffer with gooey & mushy rice. Do give these tips a try and let us know which one worked for you. Until then, happy cooking!